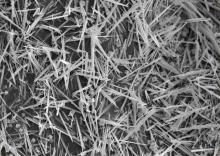 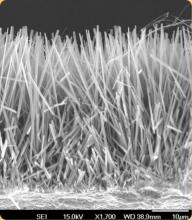 Experimental and numerical results over the past decade have conclusively demonstrated the effectiveness of turbulent drag reduction (up to 40%) through near-wall control schemes such as oscillating walls and traveling waves. However, these promising results have yet to lead to a suitable surface for practical application. We are developing a new near-wall turbulence control technique based on a recently developed nanowire surface, composed of vertically aligned Barium Titanate (BaTiO3) nanowires. Since BaTiO3 is a highly coupled piezoceramic, the surface can be manipulated by application of an electric field; and conversely the surface generates an electric potential in response to an applied mechanical load. We have hypothesized that actuation of the nanowire surface can produce cross-stream motion that will alter the structure of the boundary layer over the nanowire surface, resulting in modification of the wall shear stress. This hypothesis is based on recently improved understanding of the correlation between low-speed streak instability and the generation of drag-inducing streamwise vortices; suppressing these vortices at their onset by transverse motion controls within the viscous sublayer has proven extremely effective at stabilizing the low-speed streaks, leading to significant drag reduction.

An accelerated beam of electrons with relativistic velocities experiences an undulation when passing through a spatially periodic magnetic field. This undulation of the beam trajectory results in the generation of electromagnetic radiation from which intense, tunable x-rays can be produced.

The objective of the effort is to design a compact Bluetooth/UWB antenna design with 5GHz WLAN notchi function.

Among short-range wireless communication systems, Ultra-wideband (UWB) technology, with a frequency allocation of 3.1-10.6 GHz, has gained a lot of popularity from  researchers and the wireless industry alike due to the high data transfer rate (110-200 Mb/s) and low power consumption. However, since UWB covers the frequency spectrum of Wireless Local Area Network (WLAN) operating at 5.2 GHz (5150-5350 MHz) and 5.8 GHz (5725-5825MHz), a frequency notched function in the UWB antenna design is greatly desirable to avoid interferences from WLAN. Since 2002, various antenna structures and methods to notch a specific frequency band have been introduced. Moreover, a planar integrated antenna working on both Bluetooth and UWB has been recently introduced for systems operating in those two communication systems. 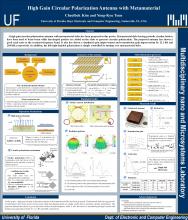 The objective of the effort is to design a high gain circular polarization antenna using metamaterial slabs for satellite communication. 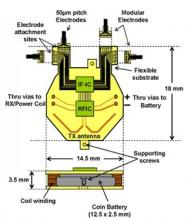 Technological advances in microelectrode neural probes have great potential to benefit patients with neurological diseases and injuries because they allow for direct interfacing and intervention with neurons of the nervous system. The interface design involves chronically collecting neural activity directly from the cortex of the brain, interpreting its information, and delivering therapy via an electronic interface. Such Brain-Machine Interface (BMI) systems that are capable of recording and processing the activity of large ensembles of cortical neurons have the potential to allow paralyzed individuals to communicate with the external world via computer control or direct control of prosthetic limbs and wheelchairs.We design, fabricate, and test flexible microelectrode array that can be hybrid-packaged with custom electronics in a fully implantable form factor to realize a self sustained BMI system. Also the flexible cable will provide strain relief to the implanted electrode and potentially improve long term viability.

This project aims at designing novel micromachining techniques for polymer-based flexible substrate microelectrodes as well as defining requirements for recording amplification, signal processing, and wireless telemetry systems. Much effort is going into the design and fabrication of highly compliant 2D electrodes which will potentially increase the possibilities of achieving reliable neural recordings over a chronic period . All efforts are in attempt to further the field of chronic neural recording for neuroprosthetic therapies.

Directed energy applications require accurate and efficient transmission of optical energy to an intended target. A three dimensional turret design consisting of a hemispherical top with a flat aperture  has proven to provide a convenient method of pointing and tracking lasers from airborne platforms. However, the turret's three-dimensional blunt design leads to complex separation phenomena which, in turn, leads to distortion in an otherwise planar emerging laser beam. This research proposes to develop an adaptive feedback control system to control the flow field around the turret in order to improve aero-optic performance. 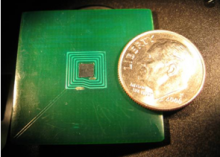 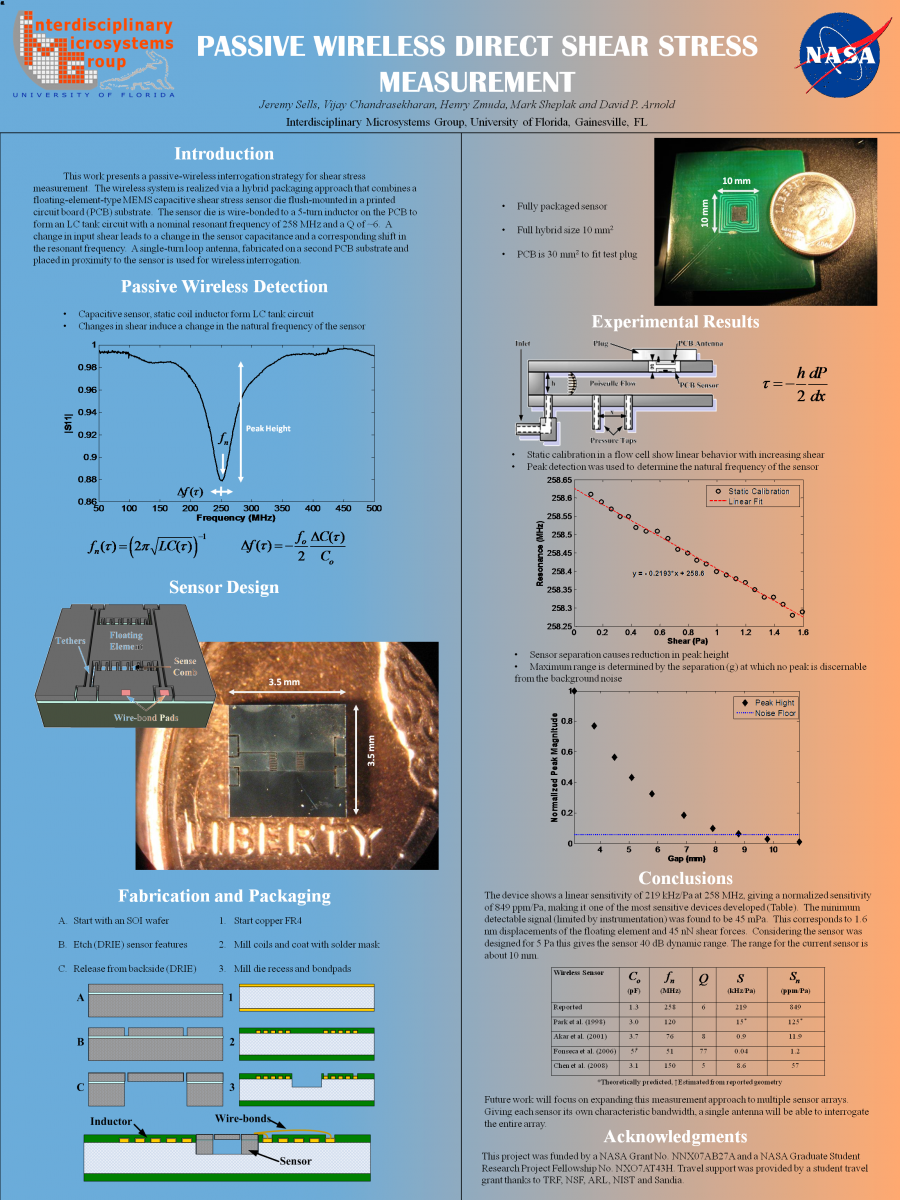 Each sensor is effectively an LC tank made up of a variable-capacitance floating element and an integrated inductor. The sensing antenna is inductively coupled to the tank and can detect a change in the resonant frequency caused by a displacement of the floating element. An array is realized by designing each sensor to have it’s own unique resonant frequency. Then a single broad spectrum antenna can monitor the entire array.

The realization of such an array will enable fundamental scientific studies of complex turbulent flows. It could also be implemented into a feedback control system for future air vehicles employing active flow control.

AlGaN/GaN HEMTs are regarded as promising candidate for RF and high power electronics applications due to unique material properties of GaN, such as, wide band gap, high breakdown field, high carrier mobility, and large saturation velocity. Other advantageous characteristics, such as, piezoelectricity and spontaneous polarization within AlGaN and GaN layers result in high 2D electron gas densities. However the wide deployment of the AlGaN/GaN HEMT technology is currently hindered due to its limited electrical reliability. Achieving high-level of reliability concurrently with high power operation remains an important challenge for this technology. Improvements in the reliability of these devices require a thorough understanding of the failure mechanisms that degrade the device performance.

Studies show that AlGaN/GaN HEMTs degrade significantly under typical device operation. Degradation in these devices has been hypothesized to occur due to charge trapping, hot electron effects, and crystallographic defect formation due to inverse-piezoelectric effect. GaN HEMTs have high internal stresses resulting from lattice mismatch between GaN and AlGaN layers and generated during device operation due to inverse piezoelectric effect. Mechanical stress impacts the device performance by affecting the carrier mobility, polarization, band-gap, trap energy levels and trap generation and hence influences the reliability of these devices. The goal of this project is to investigate the effect of stress, bias and temperature on device characteristics and understand the fundamental physics governing the device operation; and hence the failure mechanisms that degrade the device performance. Four-point mechanical wafer bending is used to study the effect of stress on AlGaN/GaN HEMT channel resistance and gate current to provide insight on the role of stress in device reliability.