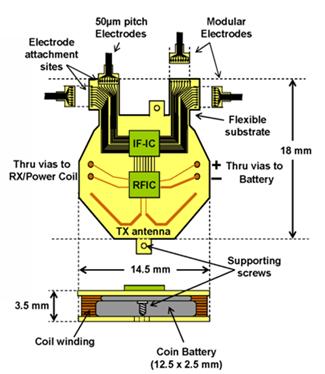 Technological advances in microelectrode neural probes have great potential to benefit patients with neurological diseases and injuries because they allow for direct interfacing and intervention with neurons of the nervous system. The interface design involves chronically collecting neural activity directly from the cortex of the brain, interpreting its information, and delivering therapy via an electronic interface. Such Brain-Machine Interface (BMI) systems that are capable of recording and processing the activity of large ensembles of cortical neurons have the potential to allow paralyzed individuals to communicate with the external world via computer control or direct control of prosthetic limbs and wheelchairs.We design, fabricate, and test flexible microelectrode array that can be hybrid-packaged with custom electronics in a fully implantable form factor to realize a self sustained BMI system. Also the flexible cable will provide strain relief to the implanted electrode and potentially improve long term viability.

This project aims at designing novel micromachining techniques for polymer-based flexible substrate microelectrodes as well as defining requirements for recording amplification, signal processing, and wireless telemetry systems. Much effort is going into the design and fabrication of highly compliant 2D electrodes which will potentially increase the possibilities of achieving reliable neural recordings over a chronic period . All efforts are in attempt to further the field of chronic neural recording for neuroprosthetic therapies.