This industry-sponsored project is funded by the MIST Center. The specific details of this project are confidential.

The Multi-functional Integrated System Technology (MIST) Center is an NSF Industry/University Cooperative Research Center (I/UCRC) led by the University of Florida and the University of Central Florida. Our mission is to facilitate integration of novel materials, processes, devices, and circuits into multi-functional systems through research partnerships between university, industry, and government stakeholders. With ~30 faculty participants from 6 different departments, the MIST Center serves as an early-stage research sandbox for developing next-generation smart systems in the Internet of Things era.

This industry-sponsored project is funded by the MIST Center.  The specific details of this project are confidential.

The Multi-functional Integrated System Technology (MIST) Center is an NSF Industry/University Cooperative Research Center (I/UCRC) led by the University of Florida and the University of Central Florida. Our mission is to facilitate integration of novel materials, processes, devices, and circuits into multi-functional systems through research partnerships between university, industry, and government stakeholders. With ~30 faculty participants from 6 different departments, the MIST Center serves as an early-stage research sandbox for developing next-generation smart systems in the Internet of Things era.

The objective of this research is to develop new manufacturing processes for the magnetic components used in modern electronic systems. The goal is improve the manufacturability, performance, and energy efficiency of power supplies and communication devices, while simultaneously reducing their size and weight. A novel process is used to combine the properties of two different magnetic materials by embedding magnetic particles of one type of material inside of a second material. The result is a new, hybrid magnetic material that exhibits improved material properties compared to existing materials. In the long run, these new magnetic materials are aimed to enable next-generation mobile electronics, communication systems, robotics, and medical devices. The project will strengthen an industry/university research partnership between the University of Florida and Electron Energy Corporation via technical exchange and a graduate student summer internship. The project also aims to broaden participation and retention of female and minority students in STEM career fields.

The maintenance procedures to replace the batteries typically require physical contact or wire connections with the devices, which may be inconvenient, difficult, or costly. Even where batteries can be easily recharged, the ever-growing hunger for portable power presents an important technical challenge. For example, the modern dismounted Warfighter carries a vast array of battery-powered technologies. The logistical burden of monitoring, recharging, and replacing these batteries is overwhelming, and no soldier would willingly go on mission without fully charged batteries. For soldier power systems, there are two main issues: the large number of different electronic devices and the requirement for constant charging for maximum mission readiness.

To address these issues, the project explore the development of an electrodynamic wireless power transmission (EWPT) technology that is capable of wirelessly delivering power to a spatially distributed collection of power receivers over distances of a few centimeters to a few meters. Compared to the more widely studied inductively coupled wireless power transmission schemes, the EWPT technology enables the power receivers to be physically much smaller and with fewer restrictions on their orientation.

In the EWPT system, a transmitting coil is connected to a power source and carries an alternating current. The field generated by the transmitting coil moves a permanent magnet in the receiver through electrodynamic (magnetic) forces and/or torques. The magnet is mounted on a spring and is allowed to oscillate. This motion is then converted into electrical energy using an electrodynamic transduction within the receiver. Even using fairly weak magnetic fields, significant mechanical oscillations can be induced when the receiver magnet is excited near its mechanical resonance (assuming an underdamped mechanical system).

Diagnosis of early-stage osteoarthritis (OA), a disease stage where emerging  therapeutics have demonstrated potential to reduce and prevent OA progression in animal models, remains a significant clinical challenge. However, OA early-stage detection could lead to interventions and change in lifestyle that would reverse the chronic cascade of joint destruction found in the OA-affected joint. Clinically, OA is diagnosed through radiographs and physical exams, yet these diagnostics are relatively poor at detecting early-stage OA. A significant need exists for technologies that facilitate early-stage OA diagnosis. Therefore, direct assessment of molecular changes within an OA-affected joint would overcome these limitations.  The goal of this project is to develop a novel magnetic nanoparticle-based technique to collect OA biomarkers from synovial fluid without the need to remove fluid from the joint space.

Our preliminary studies demonstrate a proof-of-concept for magnetic harvesting; however, additional refinement is needed to accurately and repeatedly relate the amount of biomarker collected to the initial biomarker concentration in the synovial fluid. 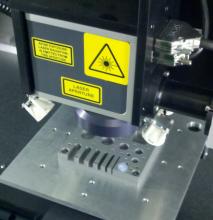 As engineers seek to design more efficient gas turbines, they require a detailed understanding of fundamental thermal-fluid phenomena, as well as active control methods, in high-temperature environments. The high-temperature requirement is based on the increasing turbine inlet temperatures, which have risen to 1500 C, in combined cycle systems in order to improve turbine peak power and efficiency. The limited survivability of silicon-based MEMS sensors in high-temperature and harsh environments has caused researchers to investigate other materials for high-temperature MEMS-based sensors; more specifically sapphire.

Sapphire’s material properties make its entry into the world of high temperature sensors promising, but it also renders most traditional MEMS manufacturing methods impractical. Sapphire’s chemical inertness does not allow for effective dry or wet etching; consequently, a more effective method of machining the material is necessary. One potential solution is to use laser ablation, or material removal by vaporization due to localized heat input, to pattern the material. Femtosecond and picosecond pulsed lasers have shown the ability to reduce or eliminate the thermal damage issues of longer pulsed lasers. These lasers are classified as ultrashort pulse width because the duration of the pulse is so short that it does not allow for thermal conduction into the crystal lattice of the material.

Despite the fact that nonlinearities are inherent in many natural and engineered systems, it is common for engineers to remove, or attempt to remove, all nonlinearity from their designs. Although this simplifies the performance analyses, it also overlooks a wide array of phenomena that could potentially enable fundamental breakthroughs.

The goal of this project is to develop thermally actuated and manufactuable microfluidic valves for a variety of applications. The valves can be integrated in a device; the actuation of valves will be controlled by a printed circuit board (PCB). The valves are expected to be useful in any system that needs flow controls and fluid metering. The project has been funded by Defense Advanced Research Projects Agency (DARPA), and a project for an immunoassay array involving a number of microvalves is currently funded by National Institute of Health (NIH).  More info can be found in this link: http://www2.mae.ufl.edu/%7Ehfan/Research.html 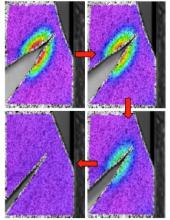 Our research goal is to develop photoresponsive shape memory polymers (SMPs) that incorporate cinnamic acid and cinnamylidene acetic acid which are able to undergo efficient photoreversible reactions when exposed to alternating wavelengths of light. The hope is that this reversible reaction will be used to actively cleave and reform covalent crosslinks to mitigate the propagation of damage though local fracture, achieve shape recovery for crack closure, and to ultimately reform crosslinks across the crack face to recover the strength of the original material.  Our current results have shown that we can produce 1200% increased toughness, recover the plastic deformation of the specimen following loading to return it back to its original dimensions and subsequently achieve 96% healing efficiency without the reformation of crosslinks in the polymer.  This work was featured live on CNN and various other news outlets.

This approach is novel in that using adaptation of the local stiffness to mitigate the propagation of damage followed by healing has not been studied in the literature; therefore this work has the potential to make significant advances in the design of autonomous structures and in the development of greater post-treatment measures concerning fractured areas. The effort from this research will ultimately provide methods to create materials that function and respond to damage; mimicking what some biological systems naturally do.