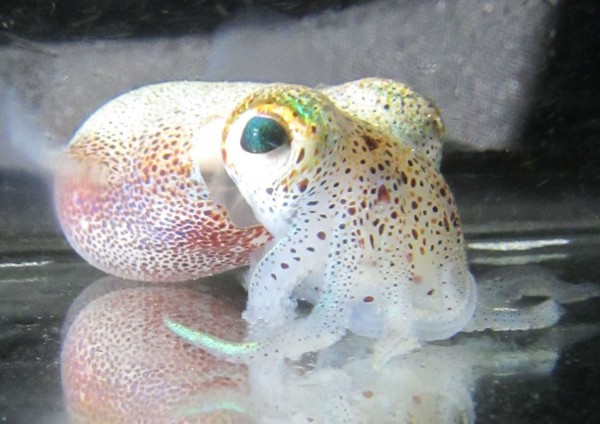 For over thirty years, the Hawaiian bobtail squid Euprymna scolopes has served as a model to understand the influences of beneficial bacteria on animal development and elucidate the molecular mechanisms of specificity during the establishment and maintenance of environmentally transmitted symbioses. The host has two symbiotic organs: the light organ (LO), which harbors a monoculture of bioluminescent Vibrio fischeri used for camouflage; and the accessory nidamental gland (ANG), a reproductive organ containing a bacterial consortium made up primarily of members of the Alphaproteobacteria and Verrucomicrobia that are thought to be used for egg defense. Our recent findings suggest that the LO and ANG originated by different evolutionary mechanisms yet how the host systemically regulates these associations is poorly understood. The bobtail squid offers a model system where one can study the mechanisms that govern both binary and consortial symbioses in the same host.

Although numerous tools have been developed for the symbiont V. fischeri, there have been significant challenges associated with building effective tools for its host. For example, studying individual host cell responses during different developmental stages have been limited. Gene expression studies have typically been conducted on whole organs that contain many different cell types. By developing nanomagnetic tools to study direct interactions between the symbionts and host cells, we will likely better resolve the molecular conversations that occur between the partners and uncover evolutionary conserved mechanisms by which aquatic hosts and environmentally transmitted bacteria form associations. The development of novel tools for the genetic manipulation and capture of targeted host cells coupled with the short developmental cycle and ease of maintaining the animals in the lab will hasten insights into the genetic basis of phenotypes in aquatic symbioses.

The goals for this project are to: 1) enable the capture of several key cell types within the host symbiotic tissues using magnetic nanoparticle technology; 2) conduct targeted mRNA, protein and metabolomic analyses on the captured cell populations to identify potential heterogeneity of host responses; 3) develop transgenic host hemocytes to manipulate immune responses in the system and 4) develop magnetofluorescent nanoparticles for in vitro and in vivo regulation of receptors on epithelial cells associated with the host symbioses. These technological advances coupled with the recently sequenced genome of the host animal will provide a critical foundation to explore the genetic architecture and toolkits animals need to form symbioses with microbes.