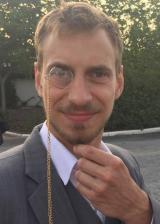 Wow, they really let you write whatever you want here??

Ladan is the brilliant host of the Neural Implant podcast, the single best podcast in the field of Brain-Machine Interfaces (and the only one!). There, and on his YouTube channel, he talks to the leaders in the field of Neuroprosthetics with the power of seven buffalo to quickly and understandably bring new developments to those interested in the field.
Ladan did his Masters in Nanobiophysics at TU Dresden in Germany where in between studying, his parties broke all records with the number of people able to fit in a studio apartment. He completed his Master’s thesis in Bangalore, India. There at the Indian Institute of Technology (IISc) he investigated the swimming characteristics of helical microswimmers in Non-Newtonian Fluids finding that scallops could indeed swim at the micro scale.
For his Bachelor’s, Ladan went to the University of Utah, the mountain biking center of the world. For his final project, his group developed a medical device which ended up winning $10k in prize money. He also co-founded the Ninkasi Brewing Club which was funded to brew beer on a dry campus (no joke!).
Ladan has travelled to over 100 countries, speaks 6 languages, has been deported to Siberia, and has trained Guinea Pigs to put out house fires (ok, only 3 of those are true!).
He hopes to start his Biomedical Engineering PhD in 2019 at UF and convert more undergraduates to the ways of the Jedi. He is especially interested in Brain Implant design and testing as well as integrating Traditional Chinese Medicine into the field of BCI’s (ant eating therapy anyone?).