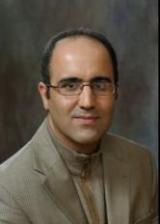 Saeed Moghaddam, Ph.D., is an Assistant Professor in University of Florida. Before joining the University of Florida in 2010, he was a postdoc (2007-2010) in Chemical and Biomolecular Engineering Department at University of Illinois at Urbana-Champaign. His research is focused on micro/nanoscale transport and nanotechnology. His major contributions to science and technology are: demonstration of membrane-based absorption/desorption cycle with a significantly higher performance compare to the existing technologies; the most detailed physical insight, over nearly a century of nucleate boiling science, on the nature of thermal field at the bubble-surface interface; development of the first Si-based proton exchange membrane (PEM) capable of operating at dry ambient; and development of the world’s smallest fuel cell. Dr. Moghaddam earned his PhD from the University of Maryland at College Park in 2006.